If you’re visiting California and want to visit the best beach cities near Los Angeles, this 1-day itinerary for a morning in Venice and afternoon and evening in Santa Monica will help you have a great day. This step-by-step Southern California touring plan is almost entirely walkable, with and will allow you to have a relaxed day at and around the beaches, while seeing the highlights of each and eating some amazing food.

I’ll be honest: Venice and Santa Monica aren’t totally my scene. Both are trendy and hip, which makes going out intimidating. As much as I love inventive restaurants, I prefer low-key settings and not “places to see and be seen.” My impression has been that this vibe extends well beyond dining to stores and even just promenades, making these beach cities a bit exhausting.

Nevertheless, Venice and Santa Monica both have a lot to offer, and I’d be remiss if I didn’t share an itinerary of my favorite way to spend a day in the two beach cities nearest to Los Angeles. (With that said, if you’re staying in Orange County rather than Los Angeles, consider our 1-Day Laguna Beach Itinerary in lieu of this one.)

For those with multiple days in Los Angeles, we’d recommend this as a good third day, following our 2-Day Los Angeles Itinerary. If you have more time in Southern California, consider our 1-Day Downtown Los Angeles Walking Itinerary for your fourth day and our 1-Day Hollywood, California Itinerary as your fifth day.

As it’s a bit more relaxed, our 1-day Santa Monica and Venice Beach itinerary is good for breaking up the trip, and will help you plan the perfect beach day…

Venice Canals – Starting south of the main drag of Abbot Kinney in the intimate neighborhood around the Venice Canals makes it easy to find street parking and also do this itinerary in a relatively efficient, linear manner.

Today, the Venice Canals feel at home in the eclectic tapestry that is Venice. In the early 1990s, these the defining characteristic of the nascent seaside resort town; business tycoon Abbot Kinney was building miles of canals to position the city as the “Venice of America.”

Things didn’t quite turn out that way, and within a couple decades most of the canals were paved over for necessary roads. The rest fell into disrepair, with areas being condemned and abandoned for decades. It wasn’t until the 1990s that renovations occurred, which is shocking given that this is now one of the more affluent and lovely areas of Venice. Personally, I think this area is lovely and full of charm, and it does feel a bit like Italy meets California.

Muscle Beach & Venice Boardwalk – We are big fans of doing the beach relatively early in the day for some crisp morning air and low crowds. Odds are against a stunning sunrise, so you don’t need to arrive that early, but arriving by around 9 a.m. is a solid idea.

You could spend the better part of the day in this area. If you want to chill on the beach, that’s one option. You can also wander around along the Venice Boardwalk to see performers, as well as the Skate Park and Muscle Beach–maybe you’ll even see Arnold Schwarzenegger pumping iron!

Abbot Kinney Strollevard – For a while, Abbot Kinney was praised as the coolest block in America and a hip shopping district that’s quintessentially Los Angeles. To be honest, I have no clue whether that’s still true. I’m decidedly un-hip, but I do know that hipness is fleeting, and nothing makes a place uncool faster than going mainstream and becoming popular with dorks like me.

Coffee & Ice Cream – The next few stops are at least partially dictated by how much time you’ve spent at the beach and whether you want to do an early or late lunch at Gjusta. Essentially, you need to arrive there no later than 11 a.m. to beat the lunch rush or after 1 p.m. We think the late lunch makes more sense, in which case you’ll do dessert and coffee first.

From there, walk to Abbot Kinney for some coffee and ice cream. We’re big fans of Salt & Straw, which any number of foodie buzzwords could be used to describe. We think “inventive” is most apt, as you’ll find all sorts of flavor combinations that are bizarre but delicious. To give you a jolt of energy, head to Blue Bottle Coffee, a specialty coffee roaster and one of the best spots for coffee in all of Los Angeles.

Glunch at Gjusta – This restaurant is basically a microcosm of Venice as a whole. The nondescript artisanal bakery is one part deli, one part Balkan kitchen housed in what appears to be a warehouse, with a calculatedly industrial style. The whole Gjusta “experience” is one barrier to entry after another, from the lack of signage to the ordering system (take a number) to the lines to the prices.

To the initiated, Gjusta is worth every bit of the tediousness. Once you’re past the hectic nature of the experience and settled in, Gjusta becomes much more approachable, a feeling that’s facilitated by the eclectic crowd. (The restaurant’s pretentious, but not elitist–there’s a difference.) The foods are sumptuous, and you’ll feel like you’re tasting bold, new flavors even in types of dishes you’ve had dozens of times before. My favorite thing is the Tuna Conserva, which is a symphony of flavors. I’d never ever order a tuna sandwich–especially one this expensive–at a restaurant, but I make an exception at Gjusta.

Mural Madness – All along Abbot Kinney, Pacific Ave, and the Ocean Front Walk that leads to Santa Monica, you’ll find beautiful murals. We aren’t even going to attempt chronicling them all, but you can find a good list and mural map here.

These are really popular for Instagram backdrops, but don’t write them off if you’re not into that sort of thing. There’s some stunning art that’s worth seeing, no matter you’re IG interest.

Head to Santa Monica – This itinerary is designed to be almost entirely walkable, and we think that’s the best approach since parking in both places can be a hassle.

If you opt to walk to Santa Monica, you’ll talk the Ocean Front Walk, which is about 30 minutes without stopping. Obviously, you’ll need to either walk, e-scooter, or Uber back to Venice to retrieve your car at the end of the day.

Tongva Park – This is a lovely green space on the inland side of Pacific Coast Highway. Although it’s steps from the ocean, it’s a reprieve from the touristy aspects of this area, and a great spot for a picnic or unwinding in the afternoon. The park also offers a variety of dance, art, music and interactive experiences throughout the year.

Tongva Park prides itself on its landscape architecture and general design (it has been recognized by the American Society of Landscape Architects), and it shows. Tongva Park is our favorite beach-area park in Los Angeles County. 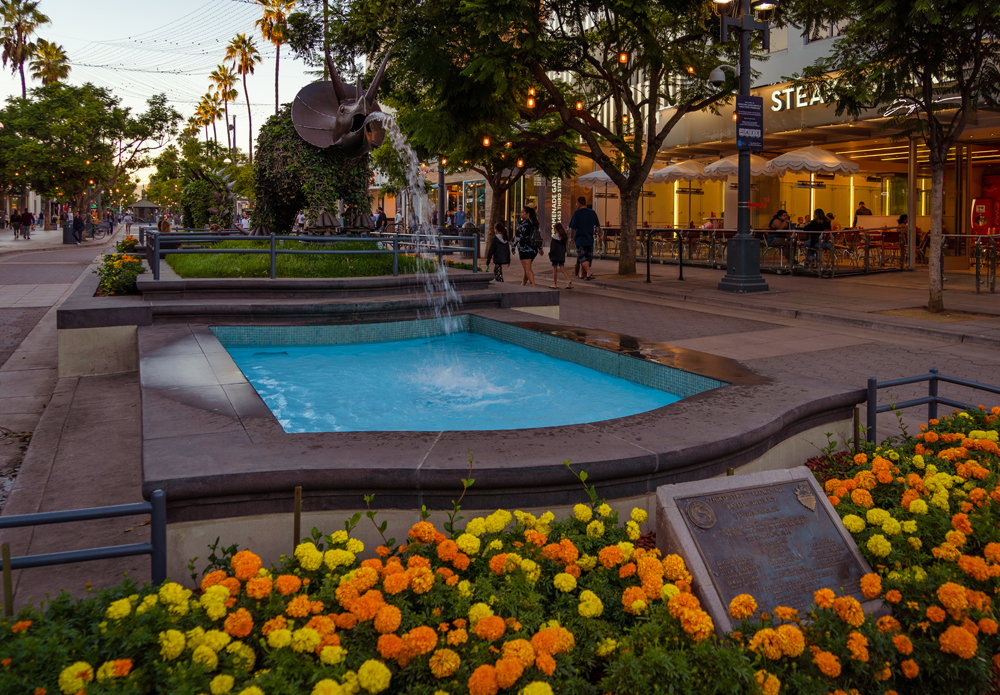 Third Street Promenade offers stores that range from giant national chains to independent luxury boutiques, restaurants, and random other stuff. Our interest pretty much lies exclusively in the “random other stuff,” which includes dinosaur topiaries.

Peerless Pier – To be entirely honest, we’re not huge fans of Santa Monica Pier. It’s dirty, crowded, the attractions are sketchy, and the atmosphere is touristy. At the same time, Santa Monica Pier is also iconic and romantic in its own sort of way.

While we don’t recommend dropping much (if any) money in the Pacific Park amusement park, there is something to be said about watching the pier light up at sunset from Santa Monica State Beach. Following that, head up to the Pier itself at dusk when everything is bathed in the cool glow of the neon lights, and the blemishes are less apparent. It’s kitschy fun and significantly better once the sun goes down.

Head to the Office – There is no shortage of great bars and restaurants in Santa Monica. This area is home to some of the trendiest bars, most innovative restaurants, and you can drop a ton of money on eating and drinking the night away.

We’re going to take this an entirely different direction. Rather than the hip nightlife of Santa Monica, we’d recommend a quintessential Santa Monica institution: Father’s Office. This is an intimate bar with a ton of craft beer on tap–and arguably the best burger in Los Angeles on the menu. Something for everyone, and in an unpretentious environment!

If you’re planning a trip, check out our Ultimate Guide to Los Angeles or our California category of posts. For even more things to do, The Best Things to Do in Los Angeles: 1001 Ideas is an exceptional resource, which is written by other locals. If you enjoyed this post, help spread the word by sharing it via social media. Thanks for reading!

Have you visited any of the places in this 1-day Santa Monica and Venice Beach itinerary? If so, what did you think of them? Anywhere you’d recommend that didn’t make the list? Anywhere you’d recommending skipping that did make the list? Questions? Hearing from you is half the fun, so if you need personalized advice or have suggested revisions to this California itinerary, we’d love to hear your thoughts in the comments below!

Killer Sea Cave Shot or: Almost Being Killed in a Sea Cave