If you like lobster and seafood, you’ll find a lot of great restaurants in Bar Harbor & Mount Desert Island, Maine, all of which are near Acadia National Park. We are big lobster fans, so on our visit to Maine, we made sure to have lobster for every single meal. Literally. Lobster for breakfast, lobster for lunch, and lobster for dinner.

Fortunately, unlike many other National Parks we’ve visited, Acadia National Park is weaved into the city of Bar Harbor (and the rest of Mount Desert Island), meaning that you aren’t at the mercy of the National Park concessionaire, forced to eat only at overpriced mess halls or expensive dining rooms.

Instead, there are dozens of delicious, independently-owned restaurants within minutes of Acadia National Park’s borders. A visit to this National Park definitely includes the culinary component of trying these local restaurants. We’ll cover some of the best options here…

Unfortunately, we didn’t have a chance to visit every restaurant on Mount Desert Island (that would take being a local for an extended amount of time…not that I’d oppose the idea), but thanks to reviews on Yelp and UrbanSpoon, we were able to narrow down our options and try some places touted as ‘the best’ by locals and other tourists.

Based on what we tried, here are our picks for best restaurants, plus rough approximations of where you can find each of them.

You could probably describe all of these restaurants as on the quaint or unique side (we far prefer unique restaurants to generic ones), but 2 Cats Bar Harbor probably takes the take for quirkiest. Not only is it a cafe, but it’s also an inn, and home to actual cats! Eating at 2 Cats really feels like you’re over at a relative’s house for a hearty meal with extended family.

Patrons could eat inside in dining rooms or outside on the porch when we visited, and it looked to us like the porch offered the better ambiance. We had lobster eggs benedict and lobster omelettes here, both of which were incredibly flavorful and bursting with lobster. 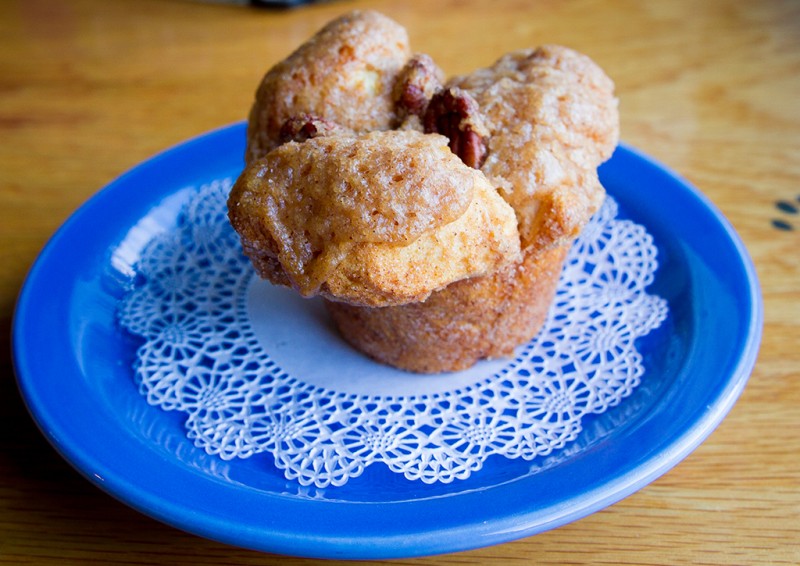 An unexpected highlight was the “Catpaw,” a freshly baked muffin that we’d highly recommend adding on to your meal. 2 Cats is definitely a quirky little cafe that we highly recommend trying when you visit Acadia National Park.

It’s easy to find on a side street in downtown Bar Harbor. The only downside is that since it’s a popular location with limited seating, lines to eat here can be very long. Prices are also a tad high, but nothing unreasonable.

Dog & Pony Tavern is a small-town tavern in downtown Bar Harbor that offers a energetic local atmosphere at night (and relatively inexpensive craft beers), but it’s also a great spot to stop during the day for their jumbo lobster roll.

The roll was literally overflowing with fresh lobster, with just the right amount of mayor and lemon tossed in to bring out the natural taste of the lobster. Chowder was really good, too, although the lobster roll is definitely the star of that menu.

We sat outside on the deck for our meal and were enveloped in fall colors with trees literally growing through the restaurant (and only a few other patrons around), which made for a quintessential Maine experience.

The only downside is that Dog & Pony Tavern can be difficult to find (we ended up just parking in a nearby lot and walking), but I suppose that’s part of the hole-in-the-wall charm. Dog & Pony Tavern is a simple, no-frills experience with inexpensive prices and excellent lobster rolls in a friendly hometown environment. What’s not to love?

Lobster pounds are pretty common just about everywhere in Maine, and Thurston’s Lobster Pound this was the best of the ones we visited in Portland and around Bar Harbor. From our perspective as non-locals, it was seemingly out in the middle of nowhere, down a series of country roads from the Bass Harbor Head Light.

It was definitely an authentic, casual place for lobster that seemed like a friendly, blue-collar after-work spot. It was well worth the drive after a long afternoon of photography, and we were pretty hungry when we arrived.

We ended up ordering a variety of things when we got there. The lobster roll was very straightforward: just a mountain of lobster on a roll, without any sign of mayonnaise or other dressing. They also had soft shell and hard shell lobster that you could pick out and have boiled. It was really fresh and succulent, and tasted sweet dipped in butter.

We also got some hot lobster dip, which was about the most glorious mix of cream cheese and lobster (accompanied by pita chips) ever. This dip is highly recommended. Prices at Thurston’s were in line with other lobster pounds, and it was a great, Maine experience. I couldn’t even begin to tell you where it is, beyond “somewhere near Bass Harbor Head Light,” so make sure to have directions ready to go before you get out here (we had some issues with spotty cell service in the area).

Our last location is the only location on the ‘strip’ in Downtown Bar Harbor. Since this area of town is a tourist-filled madhouse, we’re reluctant to include it, but we liked Jeannie’s Great Maine Breakfast so well that we just can’t leave it off the list.

Just look at that full chunk of lobster claw in the lobster eggs benedict. These eggs benedict were richer than the ones we had elsewhere, but the decadent flavor worked. Highly recommended.

The berry pancakes are another highlight of the menu, and while we were these seasonal ‘berry’ pancakes were pumpkin. I wouldn’t recommend them over the lobster eggs benedict (in my opinion, pancakes–although not this good–are easier to do at home), but these pancakes were pretty amazing. Jeannie’s is located, as mentioned, in Downtown Bar Harbor, and is pretty easy to find on the main drag. Prices aren’t too bad as compared to other spots downtown, but the wait it can take to be seated is a downside.

This just scratches the surface on good places to eat on Mount Desert Island. The other places we tried in downtown Bar Harbor were good, but we’re hesitant to recommend other places on ‘the strip’ (probably not quite the appropriate term) because they’re very touristy. This is a popular stop for visitors on cruise ships or those returning from a leisurely visit to Acadia, and it seemed to be swarmed with people most of the time.

We didn’t have a single bad meal in Maine, but the wait times and inflated prices at these other downtown Bar Harbor restaurants (not any of the ones listed in this post–these are all great options), would lead us to look for more places off the beaten path next time, and stick with those. If a lobster pound seemingly in the middle of nowhere can be so good, we’re sure there are more like it!

Have you ever dined at any of these restaurants? What did you think of them? Do you have other top spots around Acadia National Park? Share them–or any other thoughts you have–in the comments!

Our Favorite Ramen in Tokyo, Japan

Things To Do In Rocky Mountain National Park
Scroll to top