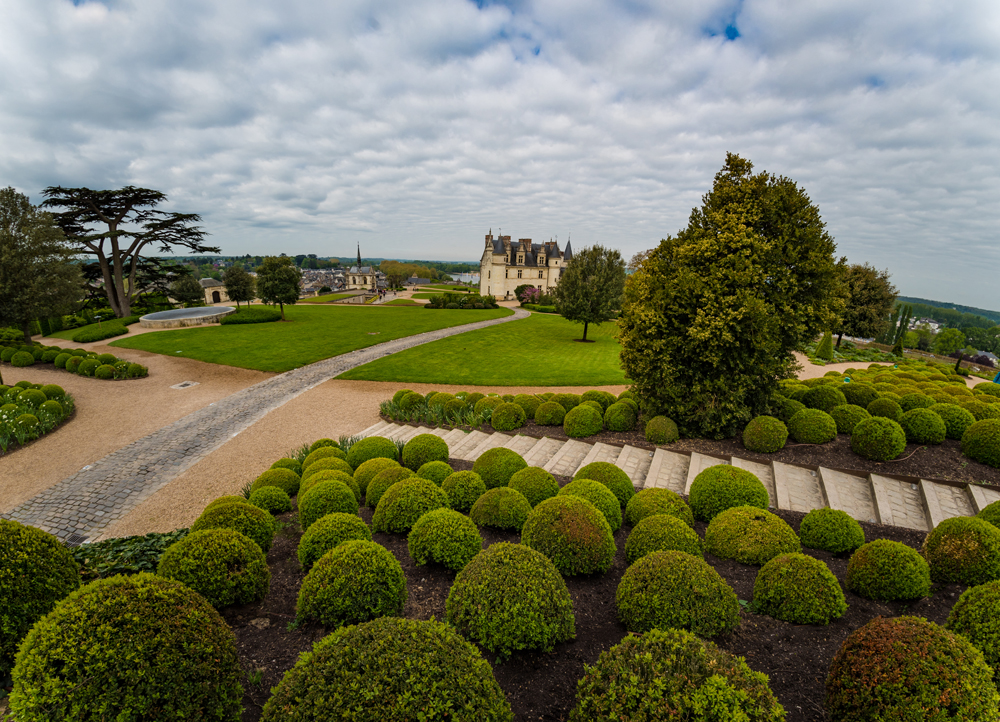 The modern history of Château d’Amboise begins when it was seized by King Charles VII in 1434. Prior to that, it had served as a medieval fortress, before being replaced by a royal residence. The château became a favorite of French kings, from Louis XI to Francis I, who spent his formative years at Amboise. Charles VIII rebuilt the castle, beginning in 1492 in the French late Gothic Flamboyant style, and then with Renaissance decorative motifs seen in French architecture as work continued through 1495. Italian influences were incorporated into later changes and work on the chateau.

That’s more or less how Château d’Amboise stands today, and its visual presence is striking. This castle has a commanding presence from the outside. Inside, there’s also a lot to see, with rooms that have been restored and offering a glimpse into royal life of the 15th and 16th centuries, and grounds that offer gorgeous views of the Loire Valley.

The various interior rooms consist of apartments, dining rooms, living spaces–basically, exactly what you’d expect from a chateau in France. They are nice, but what’s more interesting is the people who inhabited these spaces.

After visiting several locations in Loire Valley, you start to hear some of the same names repeated. This is the case again at Château d’Amboise. Obviously, the names of French royalty are to be expected, but Catherine de’ Medici is a notable fixture in Amboise’s history, just as she was in the history of Château de Chenonceau, one of our absolute favorite spots in the Loire Valley. 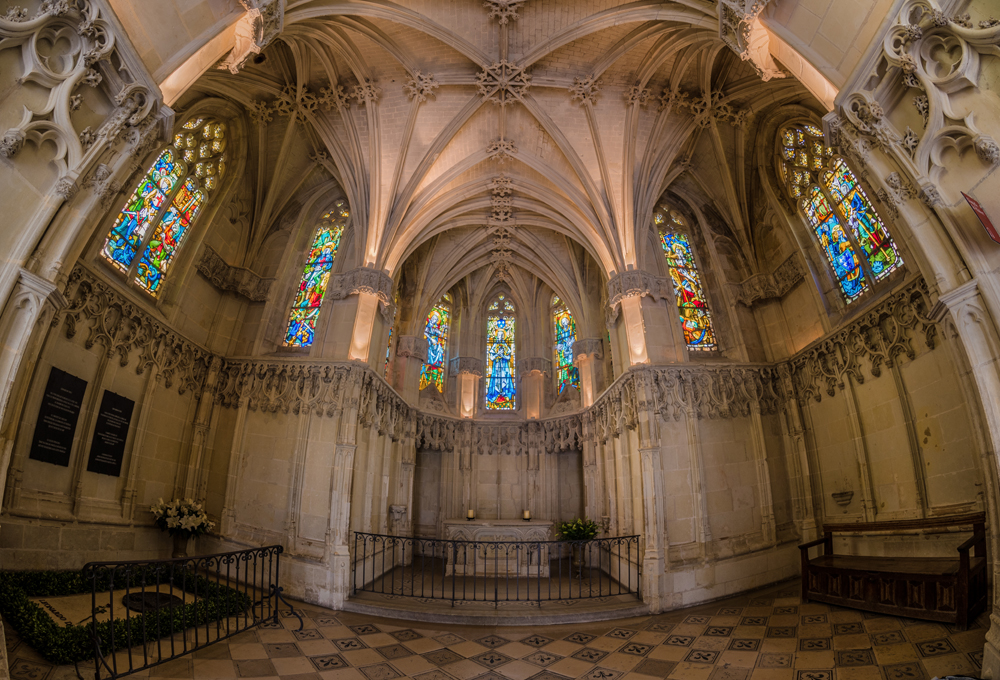 The hidden gem of Château d’Amboise is the Chapel of Saint-Hubert, a small building outside the main château. This intimate setting is gorgeous, and it’s also the resting place of Leonardo da Vinci.

Amboise has a rich history with Leonardo da Vinci, as he was invited to France by François I in 1516, where he was lodged at Château du Clos Lucé while engaging in various projects and teaching. 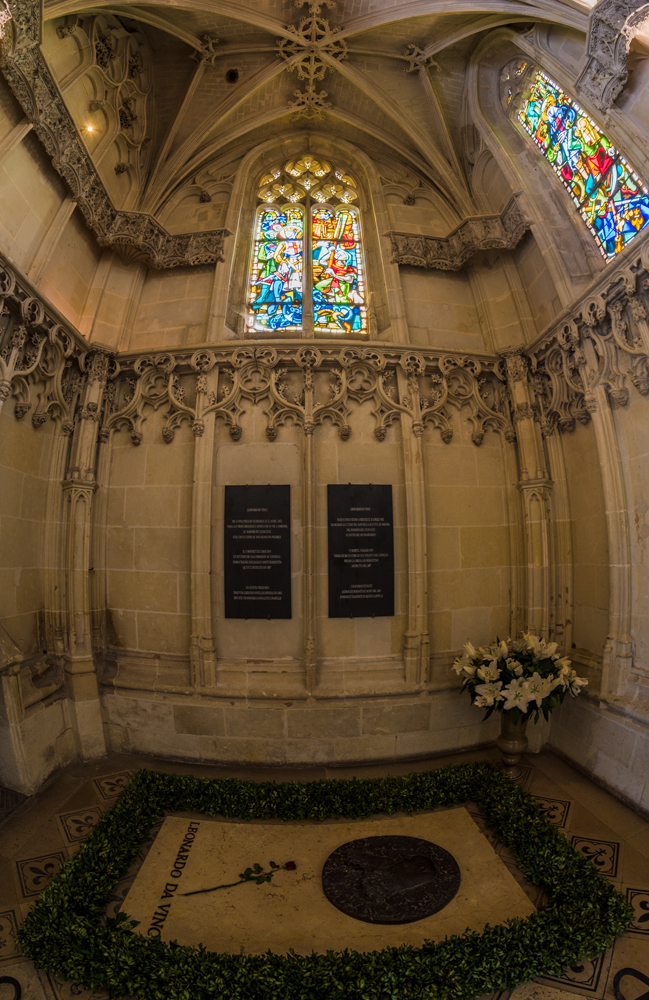 Leonardo da Vinci passed away at Château du Clos Lucé in May 1519, and was buried according to his will in the Church of Saint-Florentin at Château d’Amboise. In the 19th century, this church was demolished, his bones were transferred to the Chapel of Saint-Hubert, an outlying building on the château’s grounds.

That just scratches the surface of this chapel, but I don’t want to spend a disproportionate amount of time on it while pretty much glossing over all the rooms in the main building. 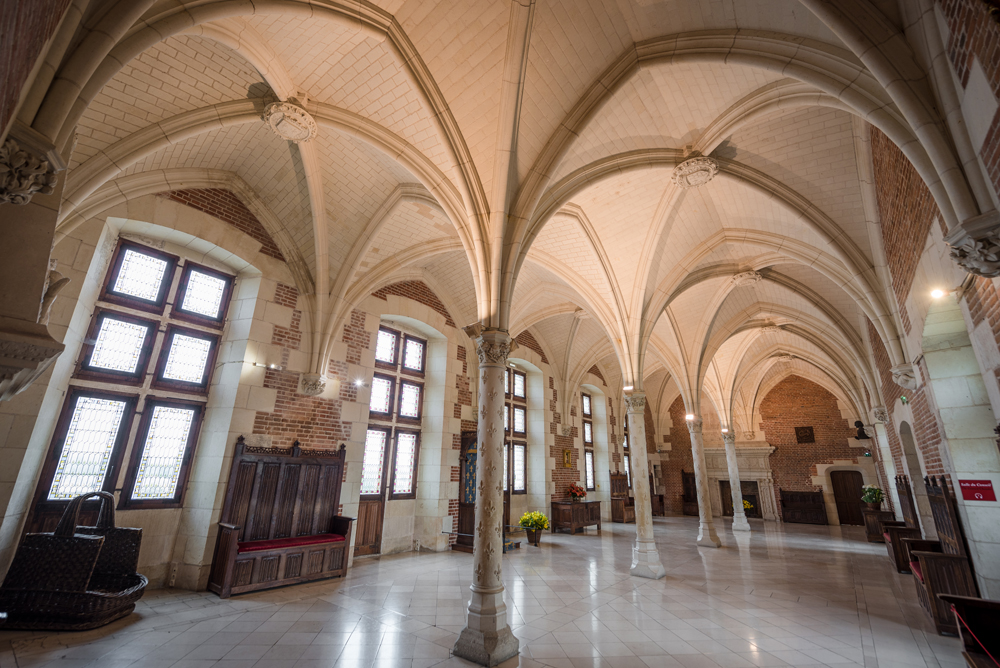 Suffice to say, the history of this chapel is fascinating, so be sure to read the placards inside (or listen to the audio guide tracks on it, should you purchase that). A lot of people accidentally miss Chapel of Saint-Hubert, which is too bad. We found this chapel to be the highlight of Château d’Amboise.

Speaking of the audio guide, we’d highly recommend it. While there are free supplementary materials to read that will give you a cursory history of Château d’Amboise, we found the audio guide much more illuminating. We shared one (because we are that cheap) and I ended up revisiting several rooms with this guide after wandering them on my own, sans guide.

Across the board, the audio guide gave me a greater appreciation for what I was observing. It was interesting, rich with anecdotes, and also slowed down the pace of the experience.

Regardless of whether you purchase the audio guide, plan on spending about 90 minutes to 2.5 hours at Château d’Amboise. I’d say 2 hours will be the sweet spot for most guests. 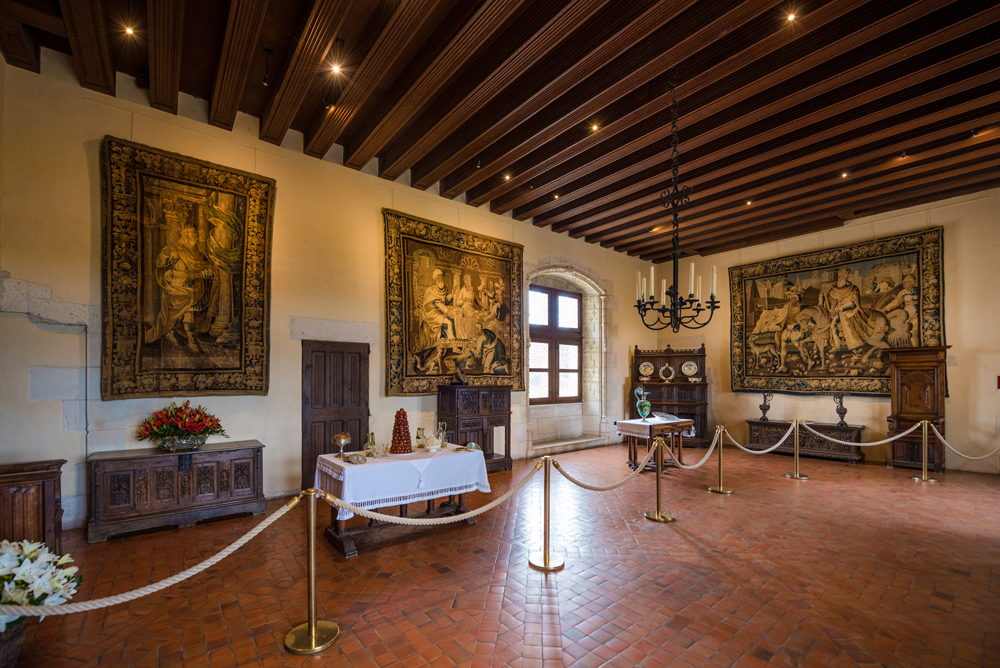 This will offer plenty of time to see the interior rooms, the sweeping views of the Loire Valley below from the higher parts of the chateau, and the grounds (which include some interesting landscaping and gardens).

And of course, the Chapel of Saint-Hubert. Do not miss that! 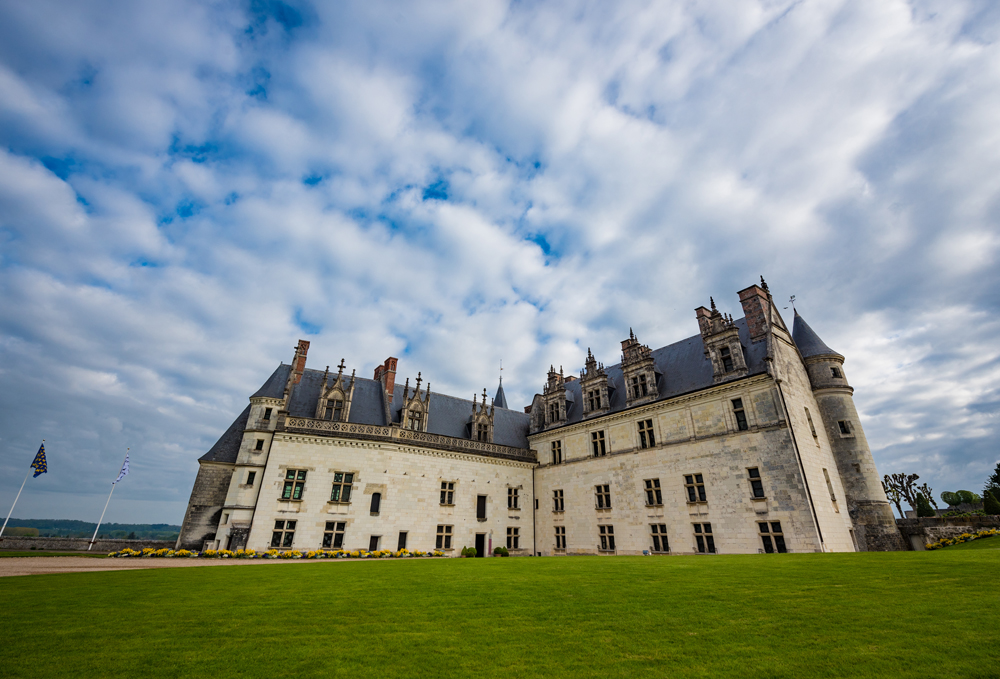 For this leg of our trip to France, we were staying in Amboise in a small chateau (probably better described as a bed & breakfast). Amboise is an intimate town that’s highly walkable and has a surplus of excellent dining–probably more restaurants dotting this quaint area than there are residences–and several worthwhile points of interest.

We chose Amboise as a home base for our time in the Loire Valley because it was a fairly centralized location for everywhere we wanted to visit, and it had three potentially-worthwhile chateaux of its own. We were very happy with our decision, and would highly recommend doing the same. 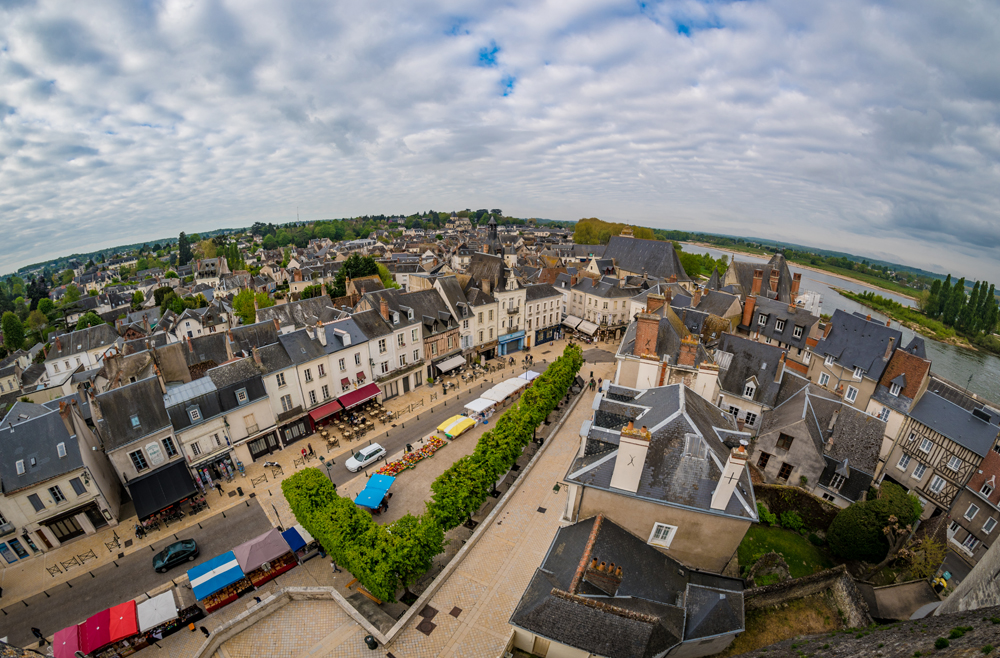 Cutting to the chase, on our first afternoon in Amboise, our plan was to do Château d’Amboise and then drive to Chateau de Villandry to experience that at sunset.

When we arrived at Château d’Amboise around midday, the line for tickets stretched several hundred yards from the entrance. 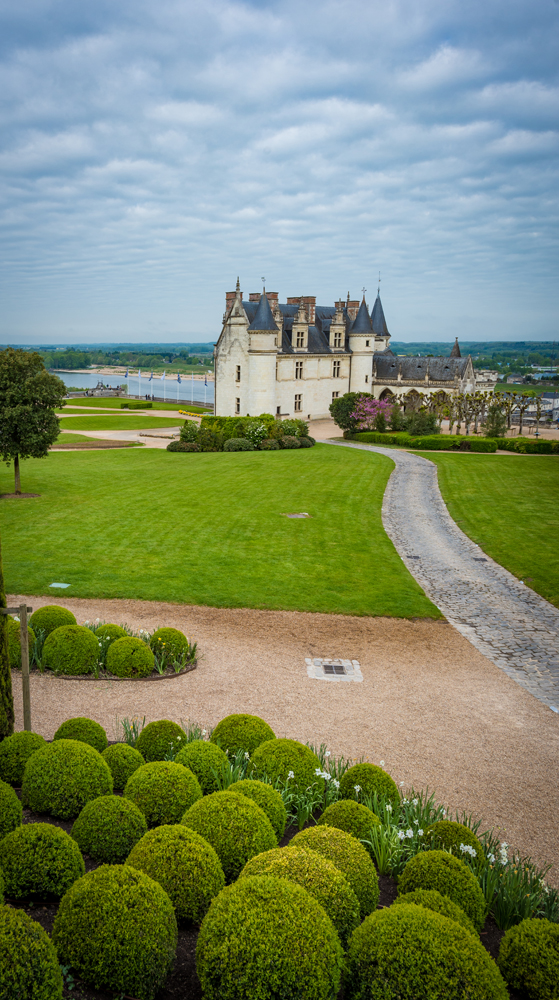 Not knowing how long this line would take–but knowing it definitely meant heavy crowds inside Château d’Amboise, we opted to leave, and instead return first thing the following morning.

That day, we arrived at Château d’Amboise about 5 minutes before it opened, and we practically had the entire chateau to ourselves for a good hour or so. The entire time we were there, we saw fewer than 10 other guests. (As you can see, most of these photos are devoid of other people; that’s not Photoshop trickery–that’s how it was.) 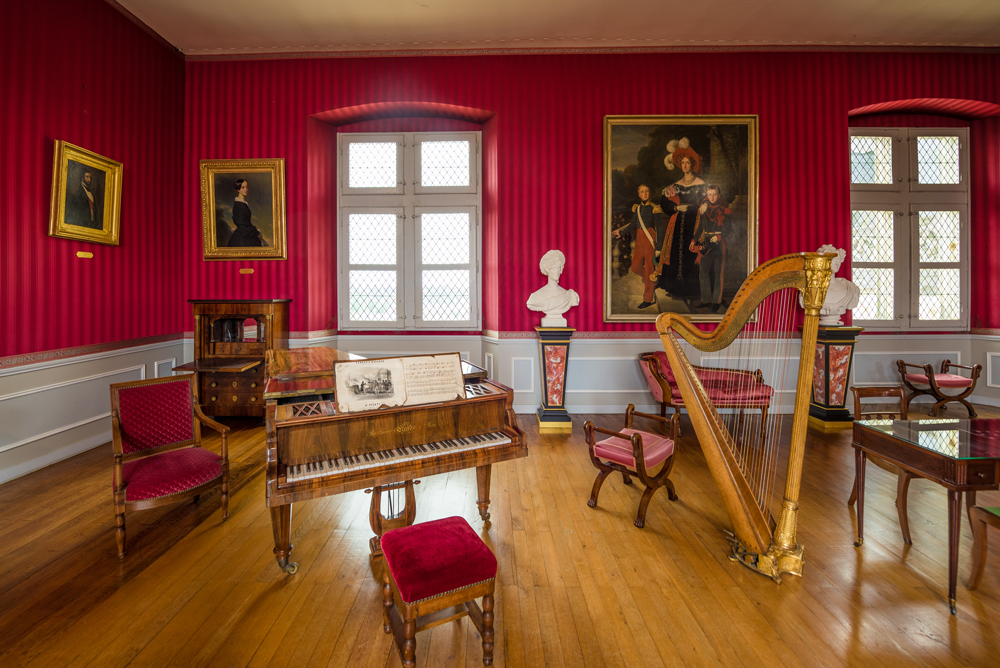 All things considered, we really enjoyed our visit to Château d’Amboise. It currently sits in the #5 slot on our list of the Best Chateau in the Loire Valley, which is impressive given the competition. In addition to its domineering presence on the hillside, lavish interiors, and beautiful views, it’s the bona-fide history and people who shaped Amboise that make its story fascinating. We found its connections to Leonardo da Vinci fascinating, and as opposed to the nearby Château du Clos Lucé, which (we think) way overplays its hand in terms of its “connection” to da Vinci, Château d’Amboise is more historically straightforward. It’s the best type of chateau–beautiful and fascinating. We’d highly recommend it to anyone with a couple of days to spend in the Loire Valley.

Planning your own trip to France? Check out our France posts, which cover a variety of places, from Normandy to the Loire Valley. In addition to these posts, I recommend planning with the Rick Steves France and Loire Valley Eyewitness guidebooks.

Have you visited Château d’Amboise? What did you think of the experience? Any tips or thoughts to add? If you haven’t visited, is this a spot in France’s Loire Valley that appeals to you? Tips or thoughts to add? Any questions? Hearing from readers is half the fun, so please share any remarks you have in the comments! 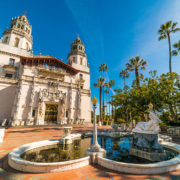 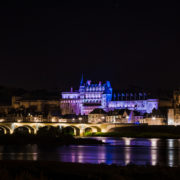 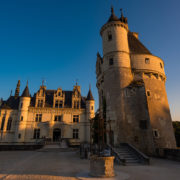