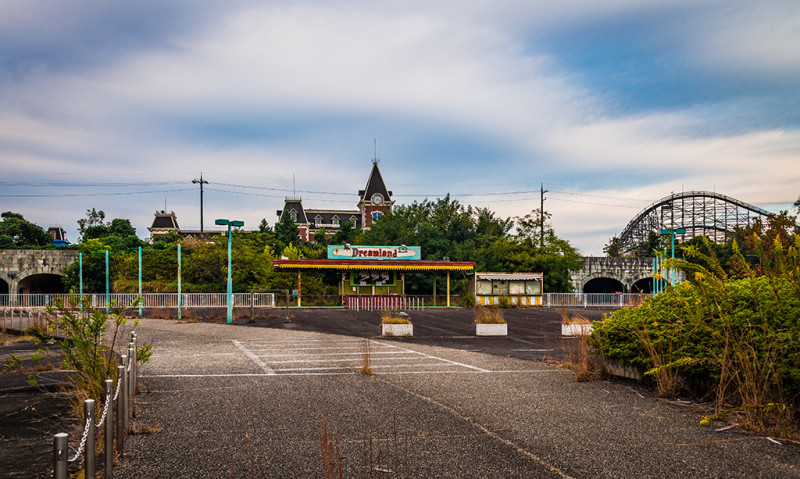 Nara Dreamland is an abandoned theme park in Japan, which opened in 1961 and was inspired by Disneyland. Actually, inspired by is generous: it was a Disneyland rip-off. From Main Street to the Matterhorn to Sleeping Beauty Castle to the Jungle Cruise, it borrowed heavily from Disneyland. It was like a photo copy 100 times removed from the original: the material was the same, but the quality smeared and deteriorated.

Despite operating for some four decades, Nara Dreamland was never “big leagues.” It was a regional amusement park. It didn’t aspire to be Tokyo Disneyland, a park that undoubtedly took some guests from it starting in 1983, but the big blow came in 2001 when Universal Studios Japan opened in nearby Osaka. With a serious theme park a short train ride away, Nara Dreamland’s attendance numbers dwindled until it ultimately closed in 2006. Since then, it has been sitting vacant, rotting away at the edge of the city.

In recent years, it has become a popular spot among urban explorers. I first learned about it several years ago when I saw this set of stunning photos from Jordy Meow’s Abandoned Japan. Knowing we’d be in Nara to see its devious deer overrunning the city, I read a few articles thinking we might take on a visit to a deserted theme park, but all cautioned of the dangers and risk of visiting, so I ruled it out.

After enjoying some tea and magazines at a coffeehouse, we headed to the Nara Prefectural Government Office for its views of the city. While there, I spotted the spires of the fake castle and fake Matterhorn in the distance. Instantly, my curiosity was rekindled. 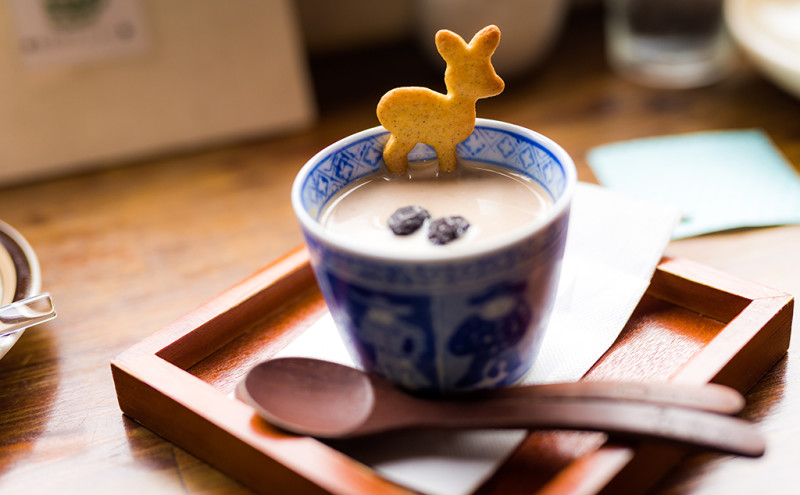 Throughout dinner, I was preoccupied searching for more info about Nara Dreamland, and whether seeing more of it was possible. Then I stumbled upon this article about Nara Dreamland by Abandoned Kansai (both of these links open in new tabs, and I highly recommend clicking them for photos from inside the park–it’s amazing), and it became pretty clear that Florian had visited Nara Dreamland multiple times, and more than anyone else. I contacted him with some questions, and received a response within minutes. 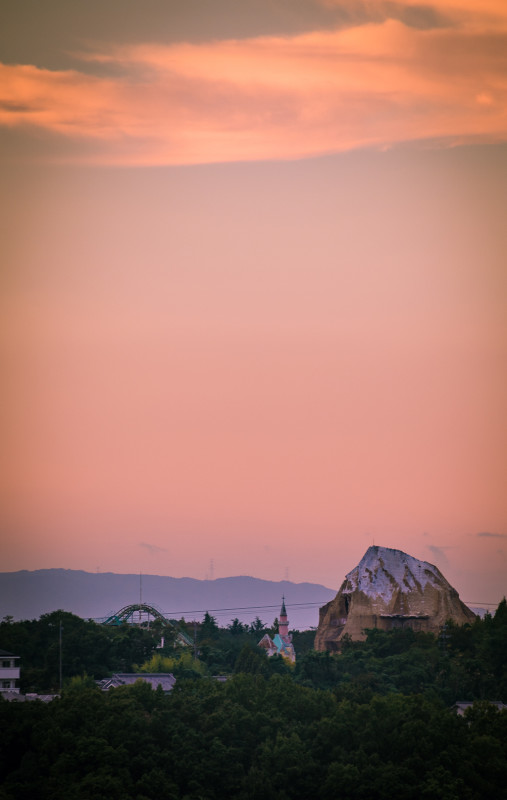 Florian’s words were ones of caution: heightened security, a reluctance among his local friends to return during the upcoming UrbEx “season”, and an ongoing court case concerning the park. Still, his words and photos added fuel to the fire. I knew I must go, if only to look at the entrance. 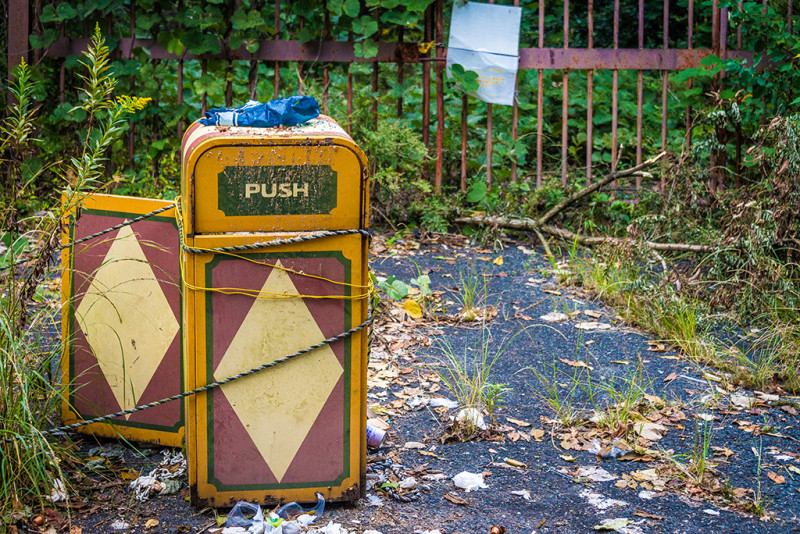 Nara Dreamland was about a 2 mile walk from our Ryokan, and I wanted to be there for sunrise, so I set out at 4:30 a.m. Even as I walked to the park, I wasn’t sure whether I’d try to go in.

Along the way, I played out the scenarios in my head. In my day, I was pretty awesome at Metal Gear Solid; perhaps my experience in that as Solid Snake, clandestine operations, and sneaking around security guards would pay off here? Somehow I didn’t think so.

The walk was pretty easy, but somehow I ended up on a road above the park’s entrance rather than the front, so I had to navigate around to the front parking lot. Once I arrived there, it was decision time. At this point, I was (presumably?) on property open to the public. 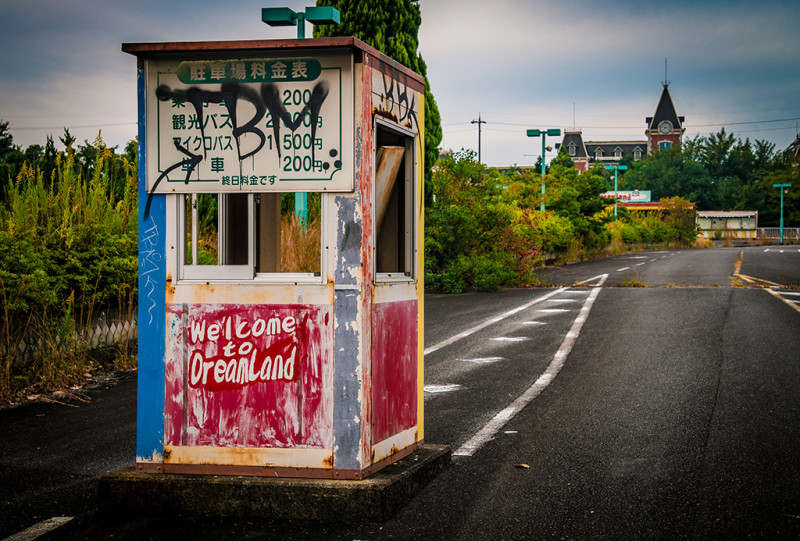 I say presumably because there was a clear point where barbed wire, fences, and warning signs were all posted, and I hadn’t yet breached that. Going further–actually into the park–would require passing the turnstiles and then scaling a large fence erected under the the tunnel of the train station (no, not that white fence below–you could get past that without crossing a fence).

I wanted to go inside, but couldn’t bring myself to do it. I rather like the privilege of being able to visit Japan, and didn’t want to end up as the star of on an episode of Locked Up Abroad. 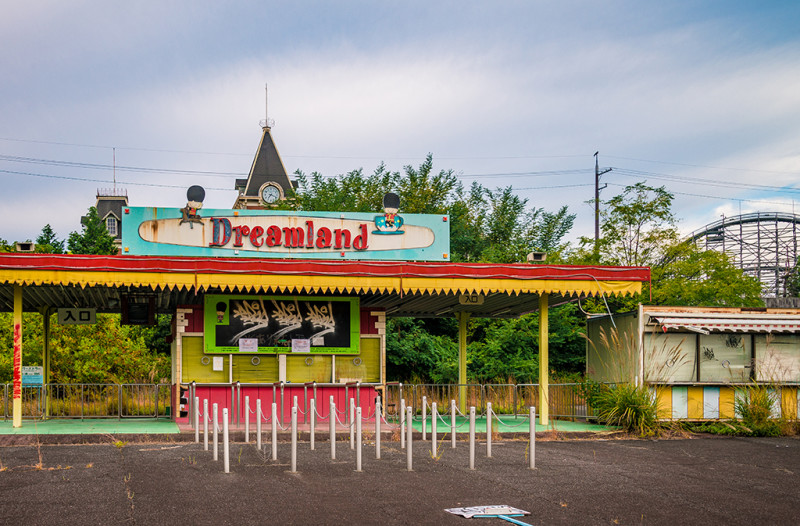 While I might seem like I act with reckless abandon in the National Parks to get “the shot,” that’s totally different. In those circumstances, I’m doing what I love–seeing nature in its resplendent beauty, and it’s all calculated risk. 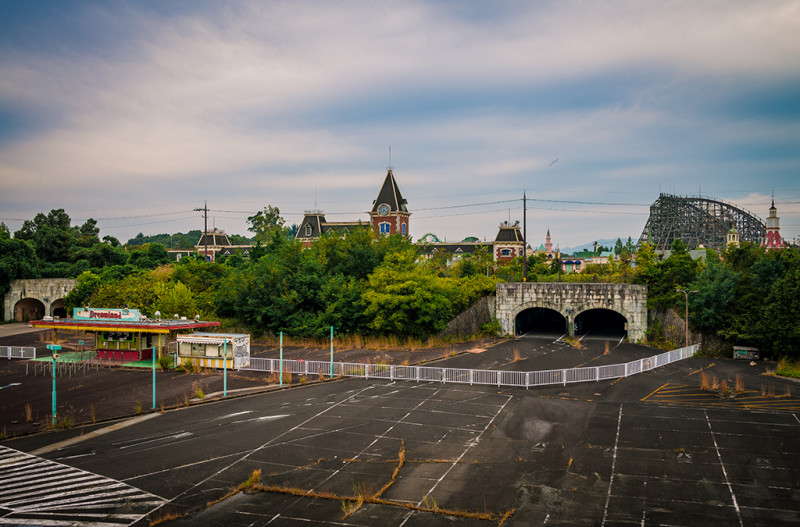 I wouldn’t exactly say I love trespassing, nor do I consider abandoned theme parks beautiful. Moreover, the risk at Nara Dreamland was entirely unknown. If caught by a Japanese-speaking security guard, how would that scenario play out?

I didn’t want to know the answer to that question. 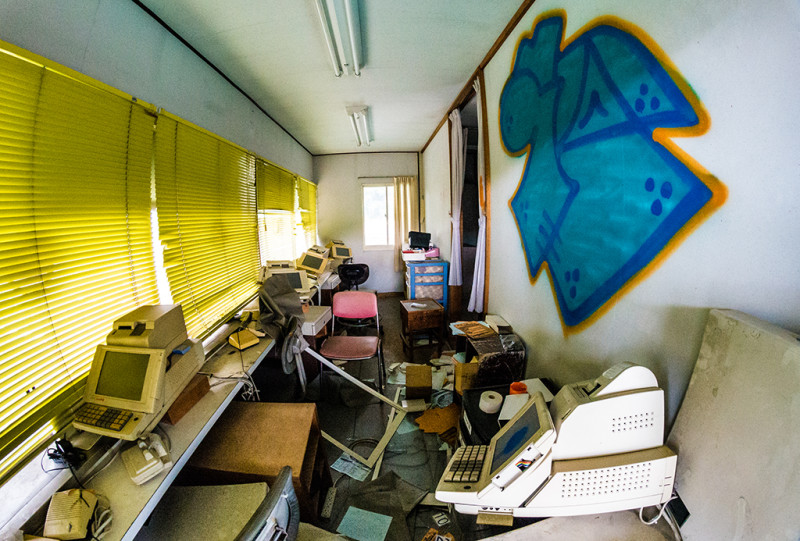 Instead, I wandered around the parking lot and saw what there was to see via views outside of the park. I know it’s not exactly as cool as the inside of the park, but even wandering around here was exhilarating to me. I was almost somewhere I didn’t belong, in a foreign country, and there was a certain risky, forbidden air to that. (Yeah, I’m not exactly a rebel without a cause…)

I looked inside the busted window the ticket booth, where random dated electronics, cash registers, and even park maps were strewn all around. It was truly as if the park operated as long as it could, then closed overnight, leaving literally everything in place. 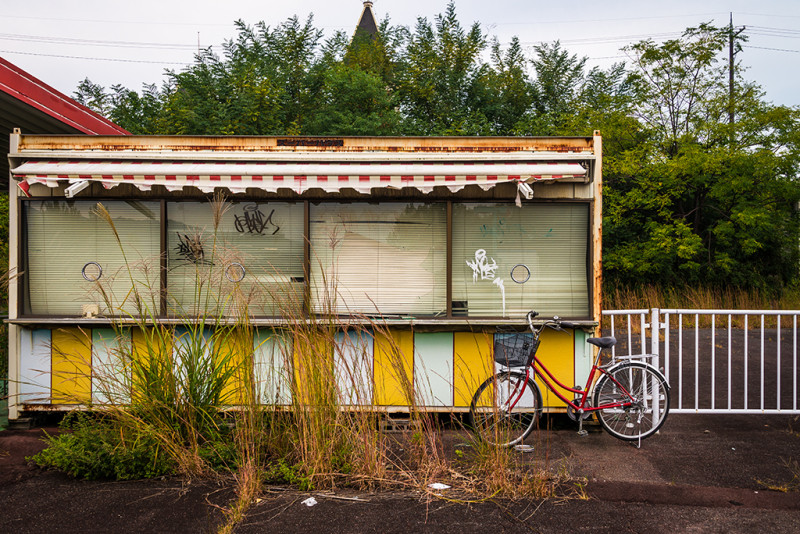 I stuck around for close to an hour, and just as I was about to leave, I noticed a bike rested against the ticket booths. I freaked out. I was almost positive that bike was not there before, so I started reviewing my photos. Yep, on a photo taken just 15 minutes prior (the shot two photos above the bicycle one) it was not there.

Worst case scenarios raced through my head. What if it was a security guard that had seen me on video and was dispatched to come after me? What if he thought I had been in the park and tried to detain me? Should I bolt right then?

I didn’t get very far with playing out these scenarios, as I saw someone walking towards me, and I froze. I decided to deal with whatever situation followed, rather than exacerbating a potentially innocuous encounter. As he got closer, he gave me a friendly wave, and it became clear this unknown individual was most certainly not a security guard. He was more like a lanky teenager, and he had been inside Nara Dreamland! 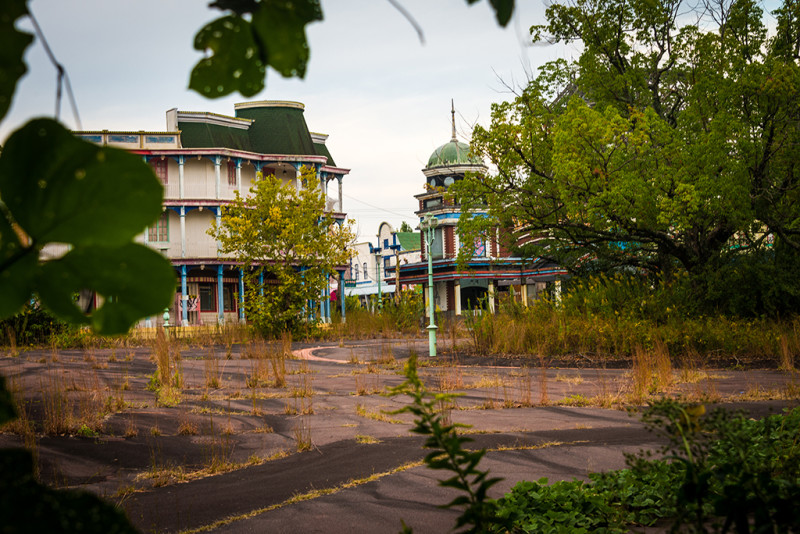 I started to ask him a few questions, but he spoke absolutely no English. I resorted to pantomime, after which he showed me a few photos on his camera. They were really something else, and made me second guess my decision. Through pantomime, he gave me a double thumbs up about going inside, and motioned me towards the fence and offered to hoist me up so I could see over the fence. At that point, I captured the above photo of Main Street–the closest I’d get to stepping inside.

He made an “over” gesture, and I wasn’t sure if he was asking whether I wanted to go in with him or if whether I wanted him to give me a push over. In a rare display of trusting my better judgment, I gave him the Japanese “no” gesture, followed by arigatou gozaimasu, and he headed on his way. With my heart still racing from this encounter, I decided it was my time to go, too. 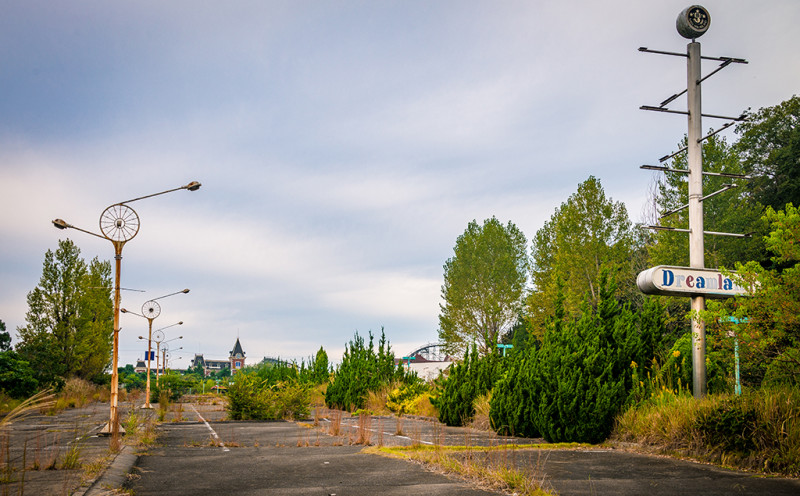 Overall, Nara Dreamland was really fascinating to see, if only from the outside. I’m not sure I’d recommend it as a “thing to do” in Nara, though. This isn’t because it’s in any way dangerous–in hindsight, I don’t think anything I did could have remotely gotten me into trouble, even considering the language barrier (jumping the fence and going inside is another story entirely). Instead, it’s difficult to recommend because it’s far away from everything else, and unless you’re a theme park nerd, there isn’t really much to see. Someday, I’d like to venture inside. At this point, I’m banking on Adventures by Disney to strike up a deal to offer guided tours. 😉

If you’re planning a visit to Japan, please check out my other posts about Nara for ideas of things to do (or not do) while there. Japan has a lot of things to see and do, so I also highly recommend the Lonely Planet Japan Guide to help better develop an efficient plan while there.

What do you think of Nara Dreamland? Would you have risked going inside? Have you visited an abandoned locales? Any thoughts of your own to add? Share any other questions or thoughts you have in the comments! 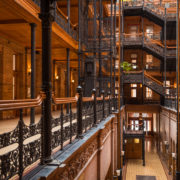 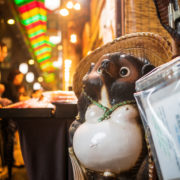 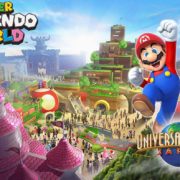 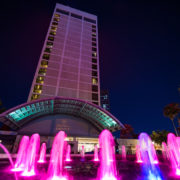 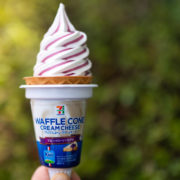 The Joy of Japanese 7-Eleven
14 replies