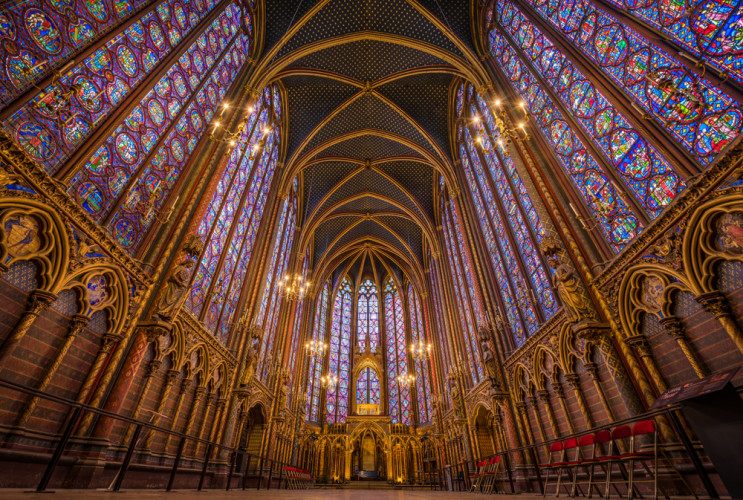 Sainte-Chapelle is a Gothic chapel in Paris, France, about a block from Notre Dame Cathedral. In this post, we’ll cover tips for visiting, offer our review, share photos, and also where we’d slot Sainte-Chapelle into an itinerary of Paris. First, an admission that we goofed. We had visited Paris many times before finally stopping at Sainte-Chapelle. We had walked past it literally dozens of times, but had never ventured inside.

When looking back, I was puzzled: where did we go wrong?! Being American, my first thought was to blame someone else. As disciples of Rick Steves, he was the first suspect. Sure enough, Sainte-Chapelle is in his itinerary for Paris. Perhaps it was missing from Samantha Brown’s Paris episode? Doubtful. Guidebooks we’ve used? All mention it.

In actuality, we have no one to blame but ourselves. Like a common word you see written hundreds of times but mispronounce when you say aloud, this was–somehow–a gap in our knowledge about Paris despite continual exposure. It took several reader comments on our post about Notre Dame de Paris Cathedral before we finally added it to our itinerary. Boy, are we ever glad that we did…

With this type of lead-in, it should be fairly obvious that I view Sainte-Chapelle as one of the top points of interest in Paris. It’s absolutely gorgeous, and ranks ahead of Notre Dame for me and maybe even Sacré-Cœur Basilica.

Either way, it’s so convenient to include in our 1-Day Paris, France Highlights Itinerary that it doesn’t make sense to skip Sainte-Chapelle. This is particularly true if you’re using the Paris Museum Pass, which makes Sainte-Chapelle a “free” add-on. 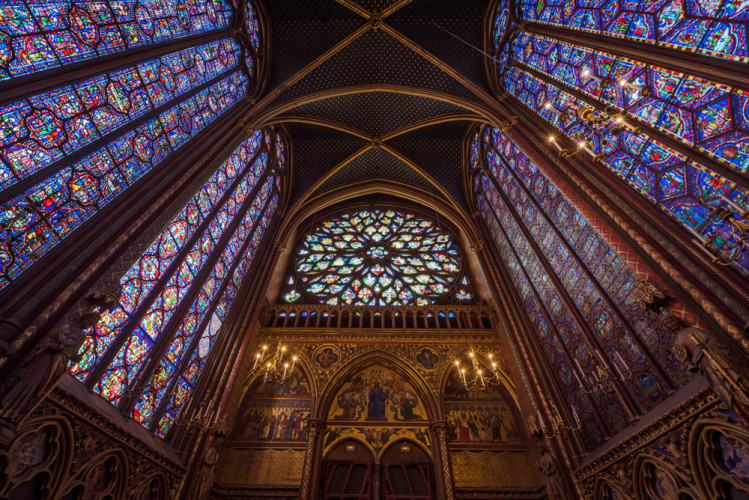 Truly, words do not do Sainte-Chapelle justice, and photos only begin to. Just learn from our mistake and go. You will not be sorry that you did. Sainte-Chapelle absolutely gorgeous. It also has a rich history to go along with that beauty, meaning a visit to Sainte-Chapelle is far from a superficial experience.

I’m not going to delve into that history (which you can find elsewhere), beyond sharing that Sainte-Chapelle was commissioned by King Louis IX to house his large collection of ‘Passion Relics’, and was built between 1239 and 1248. 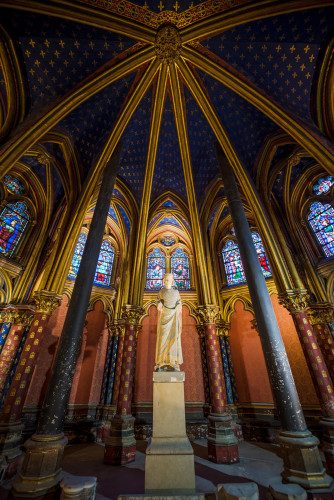 Sainte-Chapelle is divided into lower and upper parts, with the lower section being used as a parish church. The upper chapel is where the Passion Relics were once held, including Christ’s Crown of Thorns, which are now housed in Notre Dame.

The huge stained glass windows are the defining characteristic of this upper section, and they depict scenes from the Old and New Testaments, as well as the journey of the Passion Relics to Sainte-Chapelle. 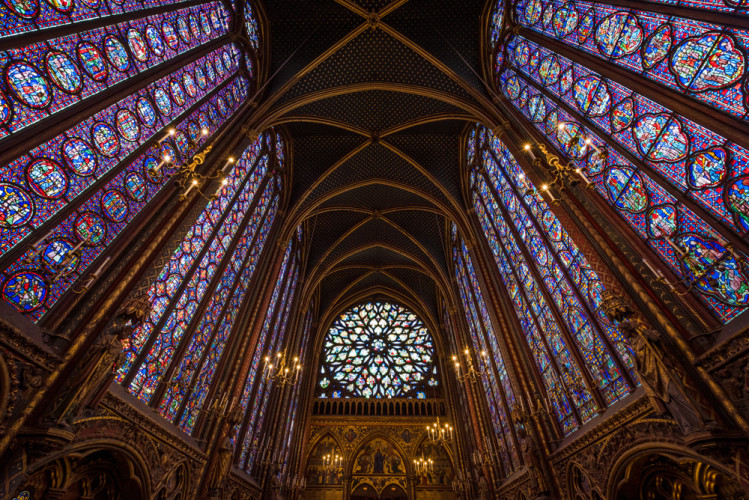 In terms of tips, my first would be to visit on a sunny day in the early morning or late afternoon when the sun will be at a lower angle and shining directly through the windows.

Yes, the experience is entirely indoors, but all of that stunning stained glass looks best when fully illuminated by bright sunlight. We went on a day with scattered clouds, and it was easy to tell when the sun had popped out from behind a cloud. The whole interior became brighter and more beautiful. 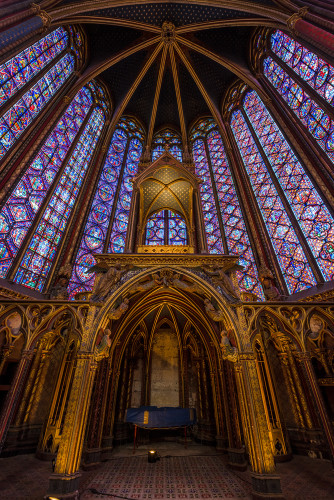 Upon arrival, you might see only one line, which is basically a big mass of people that stretches around a corner. This is what we encountered upon arrival, as the line stretched far beyond the marker for the Paris Museum Pass.

One of us walked forward around the corner to scout out the actual entrance, and there was a separate, empty for the Paris Museum Pass. The signage for this did not appear until right before the security checkpoint, so it appears that this would be a regular issue. Once we got out of the main line, several others followed, so clearly we were not the only ones confused. 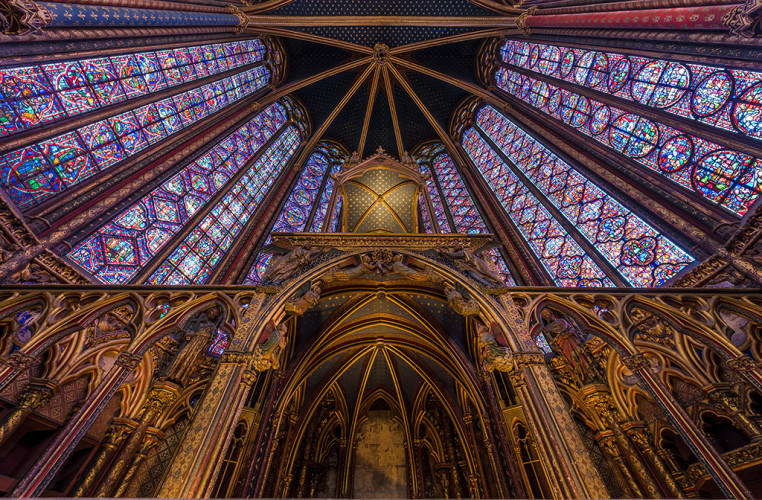 There’s a secondary benefit to arriving at Sainte-Chapelle early in the morning or late in the afternoon, and that’s a relative lack of crowds as compared to other times of day.

Due to Sainte-Chapelle’s small size, it cannot accommodate crowds very well at all. It’s perpetually crowded due to this, and the lines to enter also can be quite long as a result. 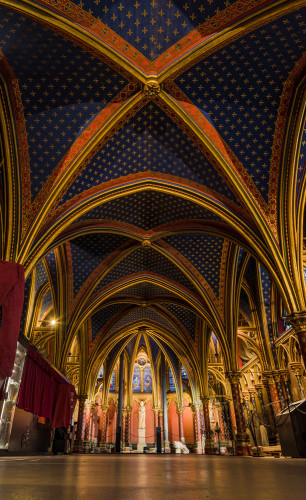 Because of its size, you’ll also find a lot of resources indicating Sainte-Chapelle can be a quick visit. There’s definitely potential truth to that, but that does not have to be the case. Since we wanted to stay until closing time but had arrived almost an hour and a half before that, we had some time to kill.

We did this by renting and listening to the audio guide, which is very comprehensive. Right down to the meaning of specific pieces of stained glass and history of key figures who played prominently in Sainte-Chapelle, it covers everything.

While a lot of this is fascinating, it’s also overkill. Fortunately, most of what we felt qualified as overkill was via a branching option that we chose to select since we had a surplus of time. If you do the main audio guide only, I’m guessing it would take around an hour or slightly less.

You can definitely have a satisfying visit to Sainte-Chapelle in 30 minutes, but I really liked our approach as a way to learn more about the chapel before seeing it in its full resplendence as the sun set and the crowds cleared out. If you’re on a tight schedule or it’s your first visit to Paris, spending 1.5 hours at Sainte-Chapelle might not be the best use of your time, though. 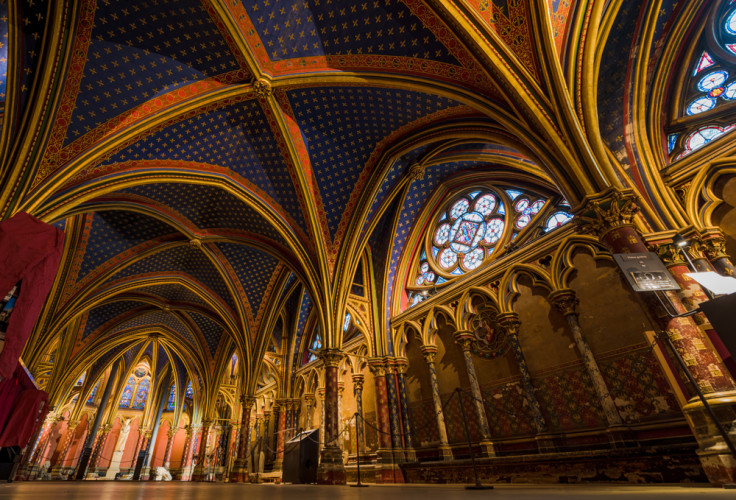 For photography, Sainte-Chapelle can be a bit challenging. Despite all of the stained glass, it can be somewhat dark inside. Tripods are not allowed inside (as is the case virtually everywhere in Paris) so you either need to shoot handheld or come up with a workaround.

My workaround was using the Green Pod Camera Platform. I had no issues with this, and would highly recommend it throughout Europe. By using this, shooting long exposures, and waiting until the very end of the day, I was able to capture clear photos without other visitors in them.

Overall, I cannot recommend Sainte-Chapelle highly enough. The beauty and history are both incredibly captivating, and the whole experience does not require a significant time commitment since you’ll undoubtedly be in the area at some time, anyway. While you can breeze through Sainte-Chapelle in 30 minutes or less, I’d highly recommend slowing down, listening to the audio guide, and simply spending some time to marvel at Sainte-Chapelle’s majestic beauty. It’s now one of our favorite things we’ve ever done in Paris, and hopefully we haven’t lost any credibility with you all by taking so long to finally see it.

If you’re planning a trip to France, we recommend starting by consulting our Ultimate Guide to Paris, France to plan all aspects of our vacation. You should also check out our other posts about France for ideas on other places to visit! 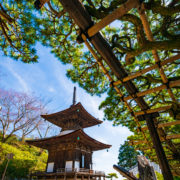 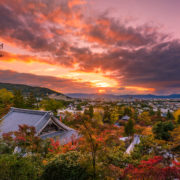 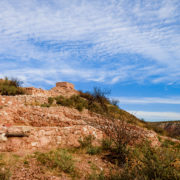 Review: Is Tuzigoot National Monument Worth It? 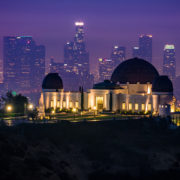 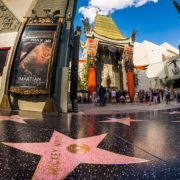