Tian Tan Buddha is one of Hong Kong’s most iconic and popular attractions. In this post, we’ll offer tips for visiting “Big Buddha,” share photos from our experiences, and offer ideas for other things to do on Lantau Island to make it worthwhile as a day or half-day trip.

Tian Tan Buddha is a 34-meter bronze statue that was was built in 1993 and faces north to overlook mainland China as a guardian. It is a major centre of Buddhism in Hong Kong, drawing tourists and religious pilgrims alike. This ‘Big Buddha’ symbolizes the harmonious relationship between faith and people, humans and nature.

We find Hong Kong to be a city with a ton of natural beauty, but Lantau Island is the pinnacle of this (of the parts of Hong Kong we’ve visited). The downside is that it can be a bit of a chore to get to Lantau Island via the MTR from Kowloon or other areas of Hong Kong, but the good news is that there are several popular tourist spots here. Our favorite is (unsurprisingly) Hong Kong Disneyland, but Tian Tan Buddha, Po Lin Monastery, and Tai O Fishing Village are all popular spots, too. With the right itinerary, you can do all of these things in a single day…

To get to Tian Tan Buddha, you’ll start by taking the MTR to Tung Chung Station. This MTR ride could take as long as an hour from Hong Kong, but the MTR is incredibly clean and efficient, so the time tends to pass quickly. Upon arrival, you’ll use Exit B. If you take Exit C, you’ll end up in the Citygate Outlets, which is a recipe for getting lost. (Not that this has happened to us or anything…)

After a short walk with some highly visible signage, you’ll find the Ngong Ping 360 cable car, along with something of a transportation ‘hub’ in this general area, as well.

This cable car offers a scenic 25-minute ride up to Ngong Ping Village, where Tian Tan Buddha is located (more or less–it’s like a 5-minute walk). Alternatively, you can take the New Lantao Bus #23, which takes around 45 minutes to an hour and also drops you off in Ngong Ping Village.

It’s really an attraction unto itself, and well worth the surcharge. In fact, I’d go as far as to say the experience of taking the Ngong Ping 360 is just as good (or better than) seeing the Tian Tan Buddha.

By contrast, even though the bus ride is “only” 45 minutes to an hour, it feels interminably long. We did this on our second visit to Tian Tan Buddha because we didn’t have tickets for Ngong Ping 360 and the line was lengthy, but we should’ve just waited. That bus ride was unpleasant and felt like it was never going to end.

One thing to note with regard to Ngong Ping 360 and its lines is that they exist whether you purchase tickets in advance or not. Which line is longer (reserved tickets or purchasing them) seems to vary by day and even time of day. If you’re staying at one of the posh downtown Hong Kong hotels, ask the concierge about tickets. They might be able to help you skip the lines entirely.

You’ll get a preview of Tian Tan Buddha on the cable car ride, and at the cable car terminus, you can take a restroom break, grab some food, and–of course–buy a variety of souvenirs to commemorate your voyage.

From Ngong Ping Village, it’ll take around 10 minutes to walk to the Big Buddha. The route should be patently obvious–just walk towards the towering buddha chilling on a mountaintop. 😉

That’ll lead you to the base of a giant staircase, which is 268 steps up to the viewing platform. These steps are perpetually crowded and people stopping for breaks, so don’t feel too badly if you go slowly. “Fast” is rarely much of an option in our experience.

Once you’re at the top, you’re directly below the Big Buddha statue. This area also includes an observation platform with stunning views of Lantau Island and the Po Lin Monastery. There are a scattering of other statues up there.

Big Buddha is one of those things that’s stunning, particularly with the mountainous backdrop, but it’s also very much a ‘what you see is what you get’ kind of deal. For most people, it’s a touristy experience rather than a spiritual one, and there’s not much beneath the surface here. Look at it for 10-15 minutes, take your photos, and move on.

That might be a cold perspective, but that’s been my impression both times with Tian Tan Buddha. We’ve done myriad temples and shrines throughout Asia, and I’ve found those infinitely more compelling in terms of spending time at them.

Tian Tan Buddha certainly has a sense of grandeur and it’s awesome to gaze at it from the bottom of those steps, but there’s no there there.

It’s still a very cool thing to see, so please don’t construe this as us disparaging the experience. We’re just trying to provide realistic expectations. (Tian Tan Buddha still ranks among our top 10 things to do in Hong Kong.)

Part of the reason (really, the reason) we’ve done Tian Tan Buddha twice is because our home-base in Hong Kong is usually on Lantau Island since we’re Disney fans. This makes accessing Tian Tan Buddha considerably easier and less time-consuming.

If you’re a Disney fan also staying on Lantau Island, our recommendation would be to take a midday break on day 2 of HKDL and visit Tian Tan Buddha during that time. (Read our Hong Kong Disneyland Planning Guide for more on that.)

If you’re not a Disney fan and will be staying in Hong Kong, our recommendation would be to catch an early MTR on a weekday, do Tian Tan Buddha and Po Lin Monastery, followed by Hong Kong Disneyland. (We’d recommend skipping Tai O Fishing Village.)

Hong Kong Disneyland usually does not open until 10 a.m. or later, and does not get busy until late afternoon. If you’re ambitious with getting up early and you take the cable car, you can be in HKDL by 1 p.m. or so, which is plenty of time for a casual visitor to see the highlights. 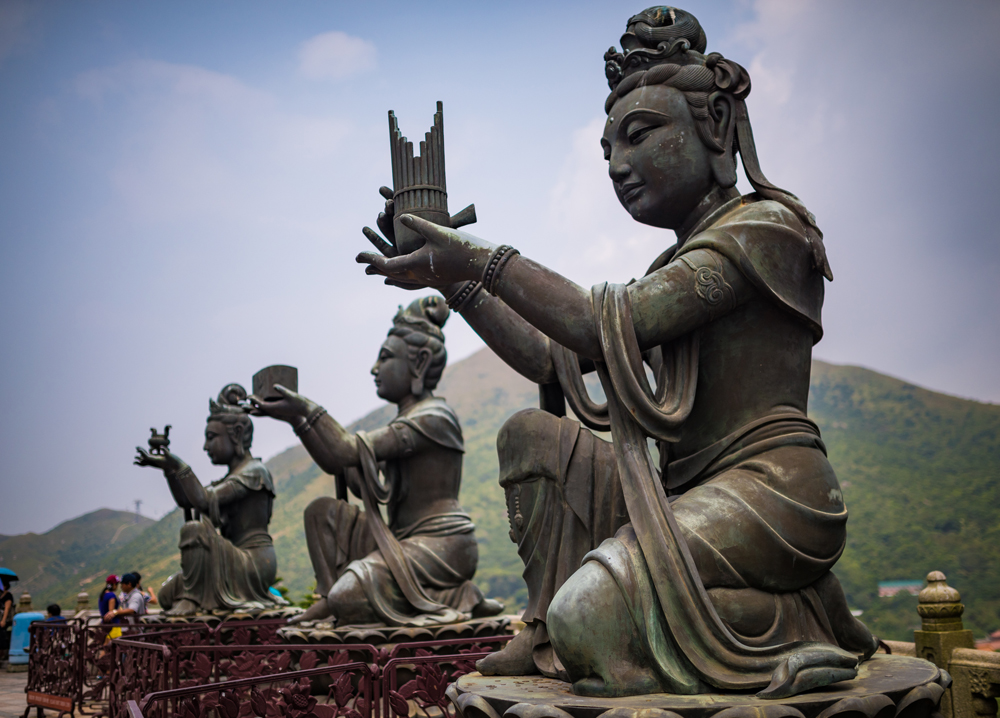 Another option would be doing Tian Tan Buddha before flying out of Hong Kong, which might offer some convenience since the airport is also on Lantau Island.

We have not tried this, but there’s luggage storage at MTR stations, so it certainly could be a viable option. (Uber or taxi-cab rates also are not bad if you found yourself in a time-crunch.)

Overall, we like Tian Tan Buddha, particularly if coupled with the Ngong Ping 360 cable car ride and Po Lin Monastery. To be honest, the Big Buddha alone would not be enough for us to recommend the trek to Lantau Island from Hong Kong. Yeah, it’s stunning, but you’re looking at a significant time commitment to see it. There are so many alternatives that are easier to access from downtown that this is a tough sell unless you’re already on Lantau Island or want to do the cable car ride or Po Lin Monastery. When part of a multi-item itinerary, it’s much easier to recommend Tian Tan Buddha as a way to spend your precious time in Hong Kong.

Check out the Hong Kong category to see what else we’ve done in Hong Kong! If you’re visiting Hong Kong, we recommend using the Lonely Planet Hong Kong Guidebook.

Have you visited Tian Tan Buddha in Hong Kong? What did you think of it? Did you think it was worth the time to head out to Lantau Island? Any questions we can help you answer? Hearing feedback about your experiences is both interesting to us and helpful to other readers, so please share your thoughts below in the comments!

Top 10 Things to Do in Kyoto, Japan